Belgium & chocolates goes hand in hand. Our search for the ultimate chocolates produced in Belgium, led us to Verviers. With a direct train from Brussels Central to Verviers Central, we also managed to make our food tour of Liège, a car-free trip as well! 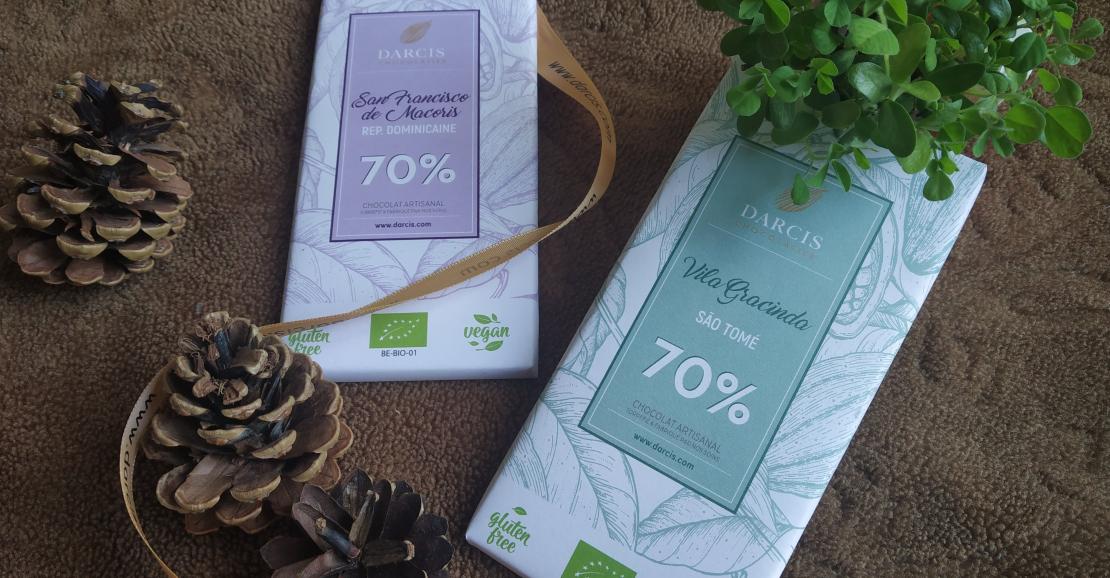 Darcis Chocolate Museum is a very short walk away from Verviers Central Railway station The entrance to the museum is through the restaurant and the museum can be discovered by a self-guided audio tour. It also includes a small box of 3 pralines to be eaten at different points during the tour.

History of Chocolate: The tour begins with the history of cocoa beans and some historic pottery, sculptures etc depicting cocoa beans. There’s a replica of a Mayan sculpture as well. Cocoa beans held a high regard and was very valuable in the Aztec culture so much that the cocoa drink was an offering to the Gods! Much later when Christopher Columbus landed in America, he realized the importance that the locals gave to Cocoa beans and brought them to Europe. Soon it spread all over Europe and the countries here began developing cocoa plantations in their colonies wherever the weather was suitable. Soon chocolate as a drink became popular all over Europe and it was only much later in England in 17th C, the way to solidify chocolate was figured out and we get our chocolate bars today!

Self-guided audio tour: After the history of cocoa beans the self-guided tour continues with sections explaining the history of chocolate making here in Verviers, the health benefits, types of chocolates and various techniques involved in the manufacturing of chocolate bars. Beyond this, is an interesting, impressive display of a few chocolate sculptures which really captured the attention of my toddler.

Chocolate making demonstration: Then comes the most interesting part. The actual manufacturing place of Darcis chocolates from its cocoa beans roasting room, chocolate melting/making, decorating all the way to packaging. On a regular tour it is only possible to see this area through the viewing windows, but with special guided tours, it is possible to go inside the manufacturing facility and try your hand in chocolate making. This happens twice a week as a part of the Darcis Academy Demonstration tour.

After the tour we headed back down to the huge store. I have to say, my toddler went a bit crazy on looking at so many varieties of chocolates, cakes, pastries and most importantly the colorful macaroons!!! We did get a bagful of some yummilicious goodness. By now, it was almost lunch time and we headed to our next destination in Liège, by train. This is a quick 30 mins train ride and we were soon at Liège Guillemins Railway station. 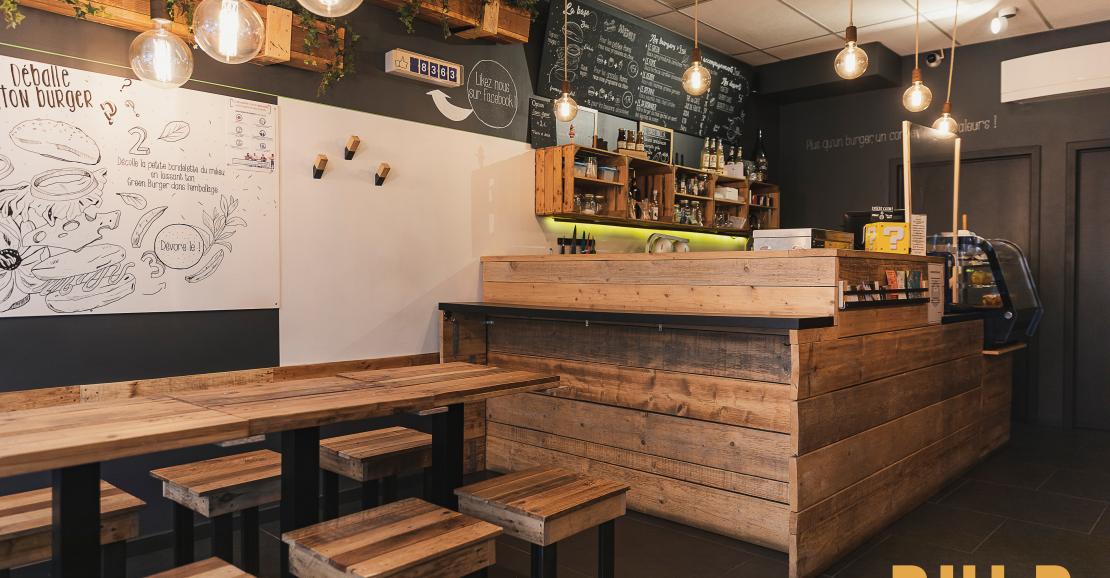 After being loaded with chocolate, I wanted to have a savory lunch and we headed to Green Burger which was 15 mins by bus from Liège Guillemins. The best way to describe it is - it is a gourmet vegan burger shop, if you will! The ingredients are 100% vegan and locally & ethically sourced. Even the packaging is taken care of, there’s no plastic used, but only paper (mostly recycled) and bioplastic made of corn starch.

My toddler and I ordered the Menu "Grande Faim" which includes a burger, potato wedges, cake and juice which we split between us. The burger was absolutely delicious with andalouse sauce, grilled zucchini and fresh tomatoes. The potatoes fried in vegetable oil and eggless cake were the perfect finishing touch for our lunch. 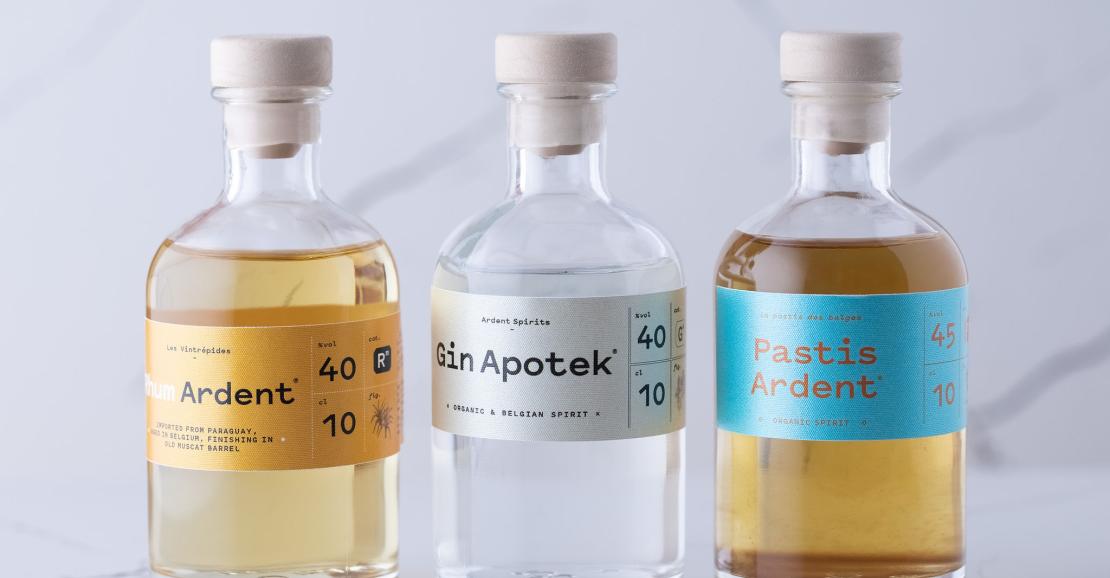 After a hearty meal, while my daughter sipped her juice on the go, we headed off to Les Vintrepides, so I could try some local alcoholic drinks! They have a wine-tasting session everyday when you can go in and try a few varieties of wines that they suggest, according to your preferences. Though called Les Vintrepides, they also have many other varieties of alcohol and I tried their Ardent tasting set that comprises of one gin, one rum and one pastis, each packed in cute & tiny 10cl bottles. Ardent Distilleries is the inhouse brand of Les Vintrepides made of organic & local ingredients.

While I had already tried gin & rum, this was the first ever time I tried a pastis, in fact, the first ever time I came to know about pastis. Pastis Ardent has quite an interesting taste. Personally, I think it would go well with Indian food or Thai food with its unique flavour infused with a blend of anise, cardamom, coriander, licorice etc! I don’t think I have ever tasted something like this before. I felt like this was the ‘alcohol version’ of the Indian dish ‘biriyani’! So yeah, after the tasting, I purchased a bottle of Pastis Ardent to take home. 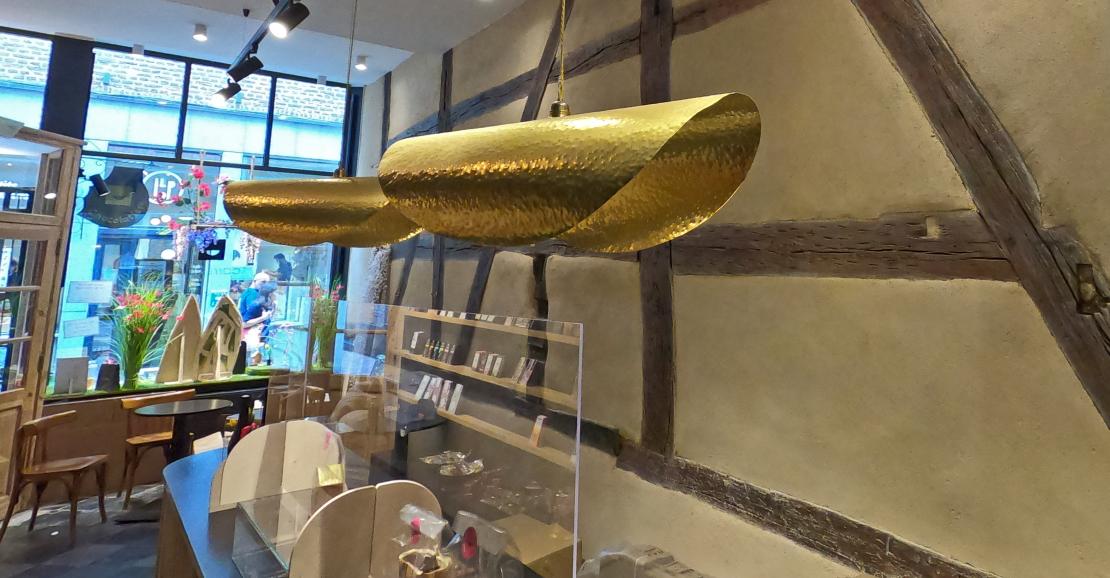 After some wine tasting it was time for some more chocolates and we stopped at Carrenoir. The moment we entered in, my toddler spotted a unicorn shaped chocolate lollipop and that made her super happy! Looking at her happiness, the owner of the store, Ms. Mélanie Lemmens, handed over a star shaped chocolate lollipop to her saying that it is a magic wand and my gal was all the more excited!

The pralines here are absolutely delicious. The most unusual was the Pepper praline with Madagascar Wild Pepper. It has such a delicate beautiful, spicy, sweet taste. Other unusual ones were the pralines infused with Lotus tea and Russian teas! The chocolates shaped like houses and boats were really charming.

Carrenois is housed in a charming historic building complete with the historic blue tiles. Ms.Melanie opens the building for the viewing for general public once every year on the Heritage Day of Wallonia (Journées du Patrimoine). 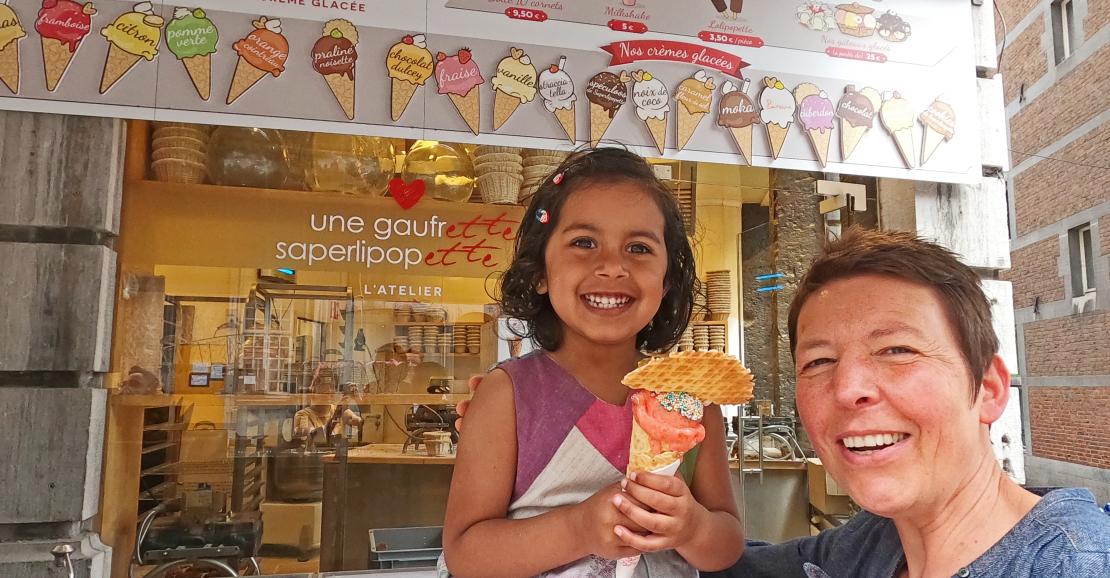 What’s a food tour of Liège without LiègeWaffles?!!! So, that’s where we headed next - to Une Gaufrette Saperlipopette for some delicious, yummy, supple, warm waffle. That said, do keep in mind that waffles are only vegetarian friendly and not vegan friendly (the recipe includes eggs). The waffles were absolutely divine. My daughter also spotted some cakes that she wanted to try. They also have some stuffed waffles apart from a gazillion varieties of cakes, cookies, biscuits, chocolates, pastries and more! Some of their eggless desserts include almond biscotti, nuts covered in milk chocolate & dark chocolate, candied oranges dipped in dark chocolate etc.

We boxed up a few assorted things to take home and then we just went across the street to their other establishment - the icecream shop! Should I even mention that my toddler got way to excited looking at so many options of icecream flavours. She chose strawberry based on color but even then, she had to choose between Strawberry icecream (vegetarian (includes milk)) and sorbet (vegan). She tasted both and finally chose the sorbet. She was given the Strawberry Sorbet in a waffle cone with a heart pattern on it and the sorbet was topped with sprinkles, meringue and a couple of waffle biscuits including a heart shaped one. Should I even bother to mention, how happy she was!!!! Suddenly Ms. Bénédicte Goffin, the owner of Une Gaufrette Saperlipopette became one of my toddler’s favourite persons in the whole world!

Just beside the icecream shop is the bakery where a variety of fresh bread is always available. We didn’t stop here though. I brisked my gal off to the next spot while she was licking her icecream. 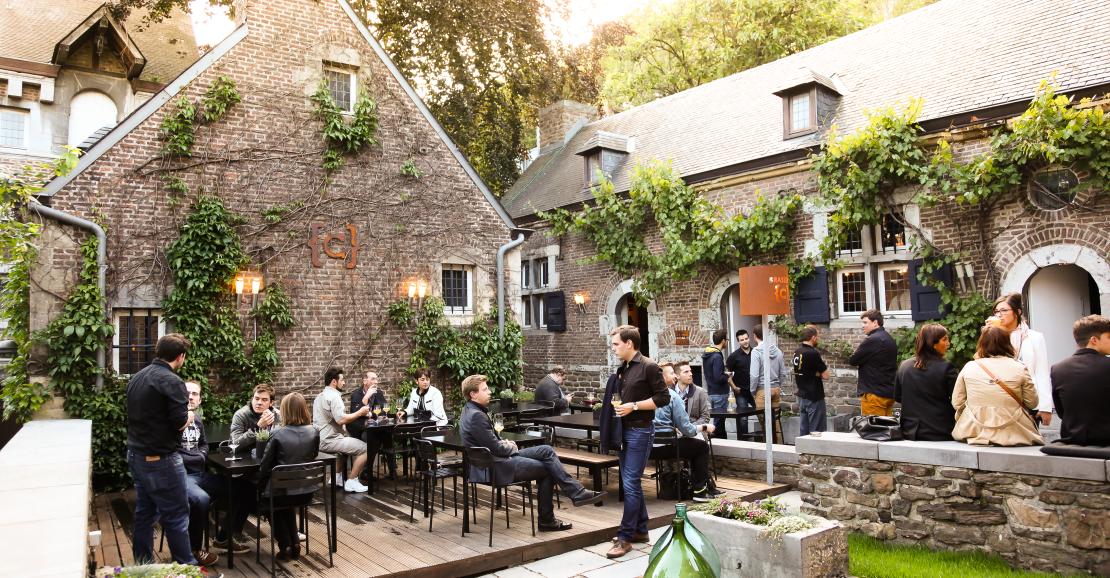 After a wine tasting earlier in the afternoon, now it was time for beer tasting and we were at Brasserie C very close to Montagne de Beuren. When you’re in Liège, you’ll spot many bars with the terrace/garden umbrella with the letter C on it. That represents this very microbrewery in Liège.

The first thing I noticed about the bar is, like rest of the buildings, in that area, this also seeps deep into history. The building is a historical one with its fireplace mantle, sculptures around it, half-timbered architecture, vintage wallpapers on ceiling etc.

The walls of the bar are decorated completely with Curtius beer glasses which is simple, minimalistic and effective. There’s also a terrace with a pool, accessible from inside the brasserie with a view of the Liège impasses, which is very very unusual. It is a unique ambience that I’ve not experienced anywhere else!

The tour of Microbrewery Brasserie C began with an introduction to the raw ingredients and then proceeds to the brewing area with its boilers, kettles, fermenters etc. After they explained the process, it was time to get a taste of one of their beers. They have 3 types of beer - the classic beer Curtius, the pale ale Smash C and the strong Belgian Stout Black C. I tried the pale Ale, which is a single malt single hop Ale with only 6.2% alcohol. The initial taste is bitter but slowly it gives out a fruity flavour too. Definitely a good choice.

My last stop in Liège was at Les Petits Producteurs, which was not to eat, but just to stock up & bring back home. Though this is very close to Carrenoir & Les Ventrepides, I didn’t want to lug around with a bag full of produce for the rest of the day, so I went back here at the end of the day. This is like a cooperative shop where small producers from around this region sell their produce from their own small farms & gardens. Not just fruits & vegetables, but they were also selling oils, vinegars, jams, bread, dairy products, local beers & wines etc. I bought some absolutely farm-fresh vegetables. 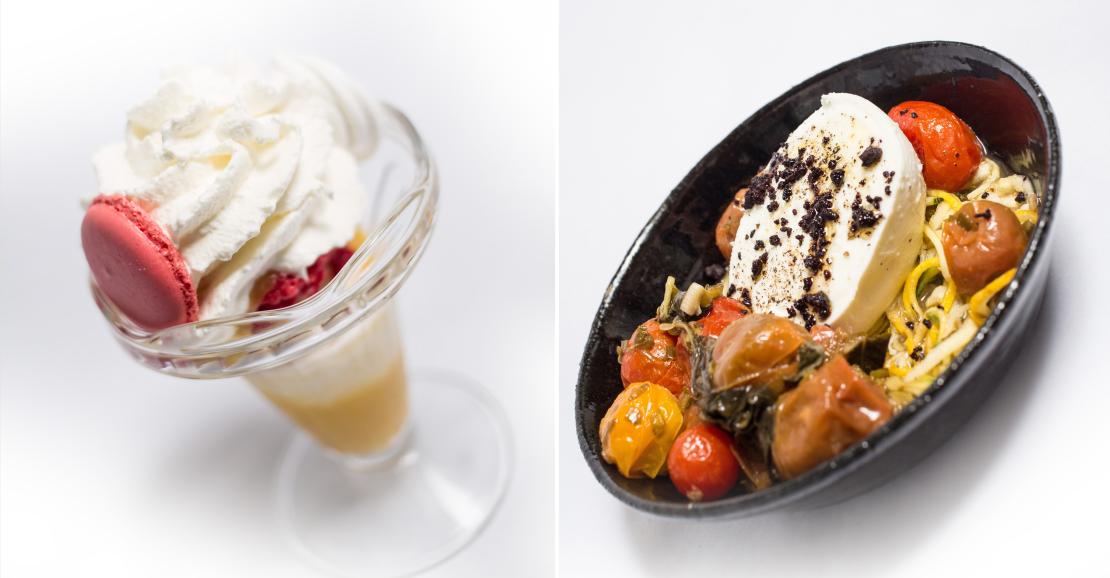 It was almost late evening by now and before heading back to Brussels, we stopped at Como en Casa for an early dinner. Como en Casa is one of the best vegan & vegetarian restaurants in Liège. Their menu changes every week depending of the local produce that they procure. I decided to go for a heavy dinner of a pasta dish with saffron crème, zucchini, onions, pecorino cheese and orange zest & herbs. It was quite an unusual combination for me, something that I have never tried before! It was a bit cheese heave too, but after eating so many sweets & pastries & chocolates all day, this flavour combination for dinner was the perfect finishing touch for the day.

About the Author: Bhushavali is an Indian travel blogger, currently living in Belgium. Her background in art-history gives her the interest and insight to explore the historic & heritage sites in Belgium. Her primary interest is UNESCO Sites and she has visited all 13 Belgian UNESCO World Heritage Sites & the UNESCO Global Geopark as well. Visit her blog here: My Travelogue by Bhushavali