When it comes to alcoholic drinks, Wallonia is best known for its beer, but for those who prefer something stronger there are some Walloon spirits worth investigating, and visits can be arranged to several producersof the hard stuff.

Peket is distilled in the River Meuse region, and is especially popular in Liège, where it can be found in all the bars and cafés. It’s a grain alcohol which gets its unique aroma from juniper berries and is usually served ‘on the rocks’. Peket is traditionally sold in one-litre clay bottles, and goes well with smoked fish or strong Herve cheese.

Eau de Villée is a lemon licqueur, named after the small stream that runs near the distillery at Biercée, near Thuin in Hainaut province. The lemons are imported from Spain and mixed with four other fresh fruit brandies before fermentation. It can be drunk neat (and cold), as part of a cocktail, or added to desserts such as ice creams and sorbets to give them an extra zing. The distillery also produces a rye whisky in the American style. 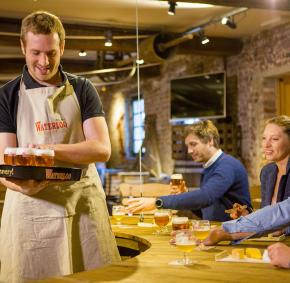