Private George Edwin Ellison was born in York on 10 August 1878. After joining the army as a regular, he leaves in 1912 to marry Hannah Maria Burgan and becomes a miner. Their son James Cornelius ELLISON is born on 16 November 1913.

He is recalled during the mobilisation and joins the 5th Royal Irish Lancers Regiment which is part of the 3rd Cavalry Brigade commanded by General Gough.

He first sees action at Mons in August 1914, followed by the retreat with the battle of Cateau and the Marne. In the intervening four years of service on the Western Front, the 40-year-old Yorkshireman had seen every type of warfare:  the war of movement early on, the mud as he had gone into the first trenches as the war became deadlocked. He had fought in the first gas attack and on the Somme in 1916, had watched the first ever tanks go up to the front. In 1918, Saint Quentin, then the canal du Nord and the breakthrough of the Hindenburg line, followed by the 100 days until Mons.

C Squadron commanded by Captain Batten Pool (including Ellison) is placed under the command of the 6th Canadian Brigade. On 11 November 1918 at 3am it travels to Hyon where it divides. Two platoons under the orders of Lieutenant Biggs pass through a place called Malplaquet heading for the Havré forest where a machine gun fire awaits them. Another patrol was sent to the north end of the wood in order to try to reach the canal. This patrol spotted German cyclists and after venturing into the woods, was greeted with machine gun fire. Lt. Biggs then tried to capture the machine gun but failed. It is 9.30am, the patrol leaves the wood to give way to the infantry. At that moment a shot is fire. Ellison is hit and falls from his horse, killed on the spot - 90 minutes before the Armistice that brought the ‘War to end all Wars’ to its conclusion.

His subsequent journey was not to Leeds, but to the cold clay of St Symphorien, to rest in a plot beside John Parr, the teenage caddy from North Finchley believed to be the first killed on the Western front on 21 August 1914. These two men from opposite ends of the war and opposite ends of England would forever serve to mark the start and finish of the most brutal conflict mankind had ever seen. And there they lie together on the outskirts of Mons; where it all began, and where it all ended for the BEF. 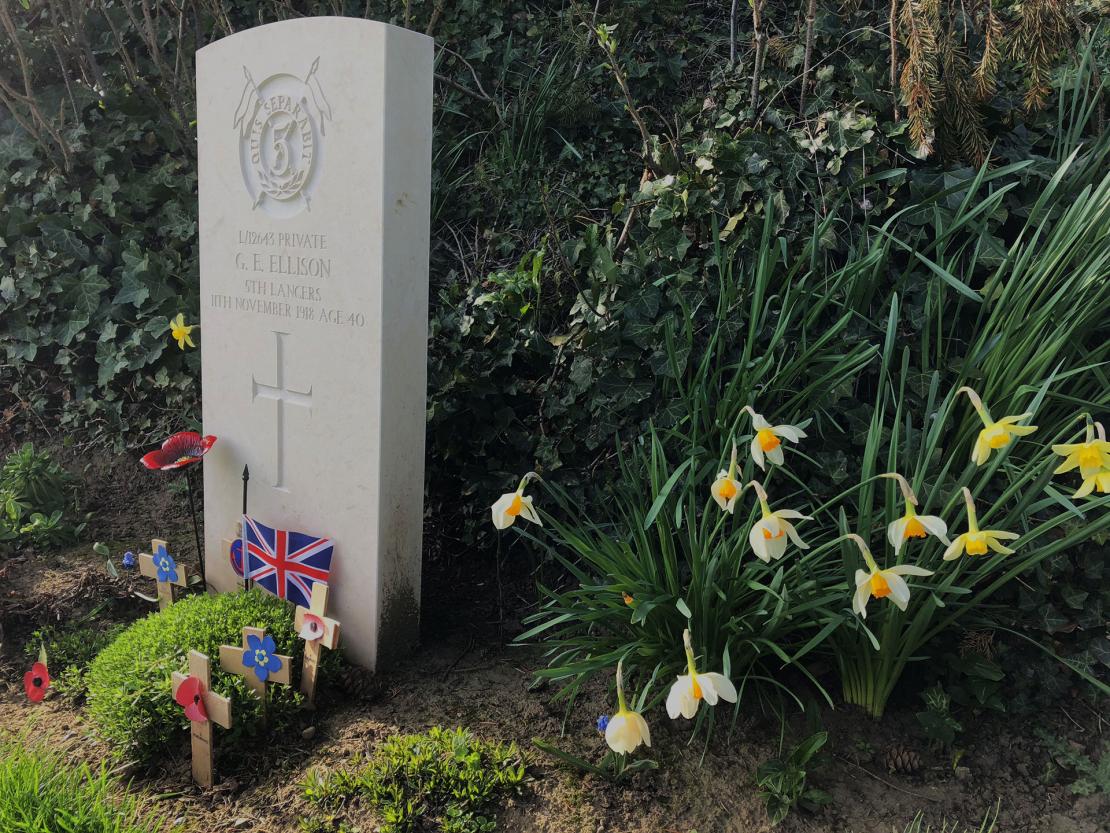