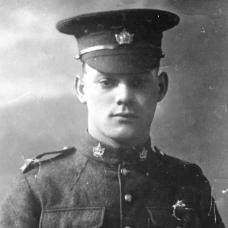 Born on 15 December 1892 in Falmouth, Kings County in Nova Scotia (Canada), George settles in Moose Jaw and works as a farmhand.

* 15 October 1917, drafted, he joins the 210th Infantry Battalion (Frontiersmen) of the Canadian Expeditionary Force in Moose Jaw under number 256265. He completes his basic training with the 1st Saskatchewan Depot Battalion in Regina on 4 December 1917.

From Regina, he travels to St. John’s on 21 January 1918 where he embarks on a journey to England and arrives at Liverpool on 6 February 1918 where he joins the 15th Canadian Reserve battalion at Bramshott. He then enrols in the 28th Canadian Infantry Battalion (Saskatchewan North West Regiment).

He crosses from Southampton to Boulogne and arrives at Etaples-sur-Mer on 2 May 1918 to re-join his unit on 1 June 1918, where he will serve in company A. (The 28th battalion is part of the 6th brigade of the 2nd Canadian division).

* 15 to 17 August, he is stationed at Damery (Marne) and then fights at Villers-Bretonneux (Somme).

* 26 August, his brigade assists in the capture of Monchy-le-Preux and Wancourt.

* 28 August, a significant part of the German defence of the Fresnes-Rouvroy sector is captured.

* 2 and 3 September, the Drocourt-Quéant line is reached.

He is gassed on 8 September 1918 in the North canal area and sent to the 1st Canadian Casualty Collection Station to be treated there and then sent to the 26th General Hospital in Etaples. He returns to his unit on 26 September 1918.

* 27 September to 1 October, he participates in the battle of the Canal du Nord (Sains-les-Marquion - Moeuvres sector) with the capture of the villages of Marquion and Bourlon.

* 8 and 9 October Cambrai is taken and then follows the ‘pursuit’: Denain, the battle of Valenciennes and the capture of Mont Houy on 1 and 2 November.

* 5 to 7 November, the passage of the ‘Grande Honnelle’ (Quiévrain – Crespin).

* On the evening of 10 November, the 28th battalion is ordered to move forward from Frameries, cross the ranks of the 29th battalion and continue towards Havré in order to secure the bridges of the ‘Canal du Centre’.

* 11 November: the battalion starts at 4:00am, crosses Hyon and heads for the wood of Havré, pushing back weak German resistance and reaching their position along the canal opposite Ville-sur-Haine at 9 am. At that time the Battalion receives a message announcing that all hostilities will cease at 11am.

Price and a friend, Arthur Goodworthy, decide on their own initiative to go on a patrol with five men to search houses on the other side of the canal. They start to examine the houses one by one when they see German soldiers with machine guns along a wall overlooking the canal. There is an exchange of fire and the Germans retreat.

Price is fatally shot by a sniper as he leaves a house and dies at 10: 58am, two minutes before the ceasefire.

He was initially buried in Havré’s old municipal cemetery but his body was transferred to Saint-Symphorien military cemetery to rest with his comrades. He was awarded the British War Medal and the Victory Medal posthumously.