The Battle of Mons saw the first Victoria Crosses of the war awarded: the first to Lieutenant Maurice James Dease and the second to Private Sidney Godley.

Lieutenant Dease was born in Ireland in 1889. He was commissioned into the 4th Battalion Royal Fusiliers in May 1910 and promoted to Lieutenant in 1912. At Mons, the 24-year-old lieutenant, was in command of a machine gun section defending the city's Nimy Bridge during the battle. 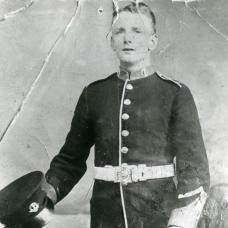 Private Godley was born in 1889 at East Grinstead, Sussex and enlisted into the army in 1913. He was a noted sportsman in particular a good cross country runner, footballer and cricketer. 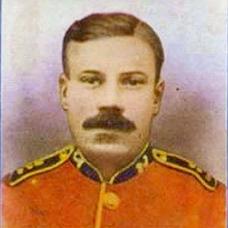 Lieutenant Dease was in command of the machine gun of a single company of the battalion at the head of Nimy Bridge which was attacked by four battalions of the enemy on Sunday 23rd August 1914. The men fought bravely for a number of hours but the position became increasingly desperate and casualties mounted. Despite being wounded a number of times, Lieutenant Dease continued to keep up a sustained fire on the enemy after most of his section had been killed or wounded. When the decision to abandon the bridge was taken, Lieutenant Dease who had been hit five times by then was unable to move having been so determined to keep the machine gun firing at all costs.

At that time, Private Godley took over the operation of the machine gun and covered the retreat of his comrades. Lieutenant Dease was carried by Lieutenant Steele but later died from his wounds.

Private Goodley knew then that he would be either killed or captured. After running out of ammunitions he threw the gun into the canal and crawled to the road where he was helped to hospital by two local civilians. Whilst having his wounds dressed, the hospital was taken by the Germans and he became a prisoner of war. He was sent to Berlin for surgery and skin grafts to his back which required 150 stitches. He became a Prisoner Of War (POW). Both received the Victoria Cross and both are commemorated to this day with a plaque on Nimy Bridge (Mons)