The willpower and determination of the soldiers in what is also known as The Battle of the Ardennes re-wrote history forever. In the final confrontation of the Second World War taking place from the 16 December 1944, the defeat of a numerically superior enemy was sealed.

Every year in villages and towns across Wallonia we remember with emotion, reverence and respect the brave soldiers who came from overseas to help bring peace to the region and paid with their lives. There are many museums dedicated to the liberation, the fallen and the first American casualties including the 40-44 Lieutenant Cook Museum in Monceau-Imbrechies.

The British In Battle

Field Marshal Montgomery was the charismatic Commander In Chief leading the allied British forces at this crucial point in history. Limited in numbers he ordered troops to leave the Netherlands and join the combat zone in the Ardennes. By the 22 December various divisions including the 51st Highland Division, the 53rd Welsh Division and the Guards Armored Brigade took up positions to prevent the German Troops from crossing the Meuse. By 16 January 1945 there was a British breakthrough and the battle was almost won. The 30e Corps were ordered to withdraw by Montgomery and the soldiers were sent back to the Netherlands to prepare for a long planned offensive into Germany and the crossing of the Rhine.

In their rest area on the 18 December 1944 the paratroopers of the US 101st Airborne Division were put on a state of alert. Rushed by road due to bad airborne conditions they were aiming to stop the advance of the German troops on Bastogne. Bastogne at this point was already surrounded by the 5th Panzer army. The division had already been stopped short of Dinant on Christmas Eve and decided against an attempt to cross the Meuse and head for Antwerp. From the South came the 4th US armoured Division of General Patton’s 3rd army who on the 26 December pushed through the German siege in spite of heavy artillery fire. Little by little the Americans succeeded in breaking through the corridor of enemy lines. This epic battle would last until 17 January 1945.

The Breakthrough of the 6th Panzer Army

The 6th Panzer were known and feared for their fanaticism and savagery. Commanded by Field Marshal Sepp Dietrich the formidable division had been ordered to cross the Meuse using five routes despite it being an area ill-suited to armoured columns. The main thrust of the Battle started in December 1944 from the Siegfried Line – a 400 mile chain of fortifications, barbed wire and tank traps. The American Units - though initially surprised did well to keep the lines of defence restored and critically delayed the German advance. At the head of this initial attempt was the 11th and 12th SS Panzer and the Kampfgruppe (Task Force) commanded by Joachim Peiper. His divisions were notorious for countless massacres of civilians and American prisoners. The task force was finally stopped at La Gleize as was the advance of the 12th, 2nd and 9th Panzer. The 6th Panzer were also withdrawn and ordered to forget their advance on the Meuse and move to the Eastern Front to resist the Russian advance towards Germany.

The Stopping of the 6th and 5th German Panzer Armies

In the first days of the Panzer offensive the German Command had attempted a rapid advance. Surprise tactics using powerful attacks with German Tanks was the strategy. However with quick thinking and deft reorganisation using reinforcements and powerful artillery the American troops seriously slowed down the advance of the German columns. Following a badly executed airborne operation the German paratroopers also failed in their mission to capture the bridges over the River Meuse. In various attacks all the Panzer Divisions were at various points stopping them from crossing The Meuse. One such battle known as The Massacre of Malmedy happened took place on the 21st December at Malmedy. German Commandos ran into stiff resistance from the American 30th Infantry division and over the next three days the American Air Force launched a catastrophic bomb attack which killed hundreds of civilians and forces alike. At this point the German High Command decided to cut their losses limiting the offensive to the symbolic capture of Bastogne. The audacity and determination of Patton and his Troops was proving frustrating.

From Bastogne to Houffalize

Stopped in their advance the German Command hoped the Panzer 5th division could carry on and save the day, allowing them to continue an advance over the Meuse and onto Brussels and Antwerp.They had managed to surround the town but the 101st

Airborne Division ‘The Screaming Eagles’ and the 10th Armoured Division ‘Tiger’, arrived ahead of the 5th Panzer Army of General Von Manteuffel. The American resistance were steadfast and determined. Divisions under General Patton were deployed to the area but advance was slow due to heavy rain and snow, hard fighting and numerous losses.  However the day after Christmas the 4th armoured division managed to break through enemy lines and connect with the town’s defenders. The siege of Bastogne was broken. Patton’s divisions continued their advance and joined General Hodge 1st US Army Division on the 16 January 1945 to capture the German salient.

As we approach the 75th anniversary of the Battle

Visitors are able to visit many museums, memorials and military cemeteries dedicated to the soldiers from overseas who came to fight for our peace. From the foxholes in Peace Woods – still visible today where soldiers dug thousands of small ditches to enable them to stand their ground during the siege of Bastogne to the poignant and beautifully maintained British cemeteries like Hotton where most of the British soldiers who fought in this battle lie or the US Henri Chapelle military cemetery where 7,992  American soldiers are buried. 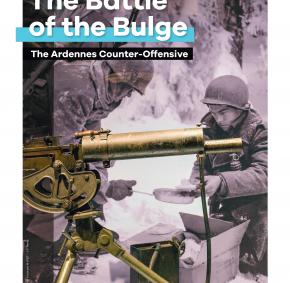