The Siege of Bastogne was part of the larger Battle of the Bulge during WW2. The Germans, trying to reach Antwerp before the Allies, forced their way through Eastern Belgium. Because all seven main roads in the densely wooded Ardennes highlands converged on Bastogne, control of its crossroads was vital to the German attack. The siege itself lasted from 20 to 27 December 1944 until the besieged American forces were relieved by elements of General George Patton's Third Army. 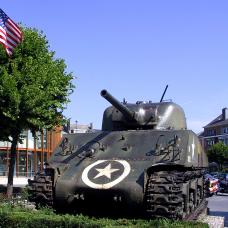 Three days after the Germans began their advance, US Brigadier General Anthony McAuliffe of the 101st Airborne Division established an emergency HQ at the Bastogne Barracks. The town was encircled and the Germans sent a message demanding surrender. McAuliffe’s response was short and sweet: “Nuts!” The barracks is still a Belgian Army base, but the public can visit the interpretation centre and the workshop where vintage military vehicles are being restored. 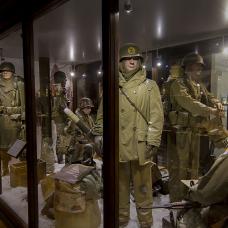 In the centre of Bastogne, another museum is dedicated to the men of the American 101st Airborne Division. The building is historic in itself. Built in 1936, it housed the officer's mess of the Belgian Army and was used by the German military during the occupation. After the war, it became a Red Cross hospital for a time, and it has now been extensively restored with a range of unique exhibits, mannequins and lifelike scenes from the Battle of the Bulge. In the basement, there are reconstructions of a hospital and an underground shelter, where you can relive the experiences of a local family as German bombs rained down on the town. 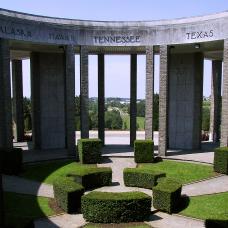 The Battle of the Bulge turned out to be the bloodiest engagement involving US forces during the entire Second World War. In nearly six weeks of fighting from mid-December 1944 to late January 1945 more than 19,000 American service personnel were killed, with nearly 50,000 wounded. Their heavy sacrifice is commemorated at the star-shaped Mardasson Memorial, sited on a hill outside Bastogne. The star-shaped memorial is engraved with the names of what was then America’s 48 states. In a crypt below the monument are three beautifully decorated altars representing the Catholic, Protestant and Jewish faiths. 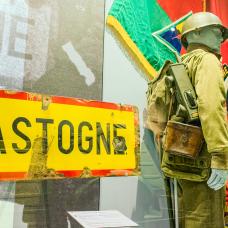 A short distance from the Memorial is the strikingly modern Bastogne War Museum, like Mardasson, is designed in the five-point American star shape. The museum is devoted to World War 2 in Belgium – from its origins to the Battle of the Bulge. Highlights are the 3D films with multi-sensory effects, including a squad of American GIs in an Ardennes forest in December 1944, and a tavern in Bastogne during an aerial bombardment, with tanks roaring outside and the civilians cowering in the cellar during a power cut.

As you walk through the vast presentation space littered with tanks, jeeps and other military vehicles, you encounter four lifelike characters describing their wartime experiences: a boy from Bastogne, his teacher, a GI and a young German lieutenant. Unforgettable.