The Germans had launched their counter-offensive in the Ardennes from a section of the ‘Westwall’, better known to the Allies as the Siegfried Line - a 400-mile chain of fortifications, bunkers, barbed wire and tank traps that Hitler ordered to be built in the 1930s. 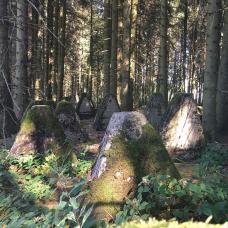 It ran along Germany’s western border from Holland in the north to Switzerland in the south. Prodigious amounts of concrete, steel and manpower were used to upgrade the original Siegfried Line constructed during World War 1.

The main German thrust at the start of the Battle of the Bulge in December 1944 came from the 6th SS Panzer Army, their strongest and best equipped force of tanks, which was based near the Belgian border in an area known as the North Shoulder.

The 1st, 2nd and 99th American Army divisions, initially pushed back, eventually held up the German advance in a fierce engagement at Elsenborn Ridge, where three American GIs earned the highest military award, the Medal of Honour. Numerous relics of the Siegfried Line remain as they were, including many thousands of ‘dragon’s teeth’: pyramid-shaped tank traps made of concrete and steel, now softened by moss and vegetation but still capable of stopping any motorised vehicle in its tracks.

Deep in the woods, on the Belgian side of the (unmarked) border, look out for deep indentations in the ground, where the Americans dug emergency field hospitals for their wounded.